Did you know that Kilkenny is not only known for its medieval history, it’s also known as home to some of the biggest movie blockbusters and Oscar Nominated Animators in the globe. There is no doubt, Kilkenny has a strong reputation for creativity, artistic excellence and brilliant locations for movies, and here’s why:

Oscar-Nominated Wolfwalkers is set in Kilkenny City during the Cromwellian conquest of Ireland and follows the life of a young apprentice hunter who journeys to Ireland with her father – and her falcon, Merlin. Wolfwalkers takes a 17th-century look at Kilkenny’s iconic medieval mile, cobbled streets and magnificent architecture & forests, all in one film that captures the imagination of both old and young. 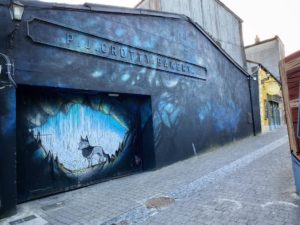 Kilkenny based company, Cartoon Saloon produced the animation and on top of the Oscar nomination, Wolfwalkers was awarded a phenomenal 28 international awards for its outstanding production.

It comes as no surprise that Kilkenny’s picturesque town of Inistioge was named as one of the ‘Top 25 Movie and Film Locations’ in 2019.  The town is home to some of the world’s most famous movies and was the choice of location for the movie Circle of Friends.

Based on the Maeve Binchy novel of the same title, this is a beautiful coming of age story involving the lives and loves of three young Irish girls in late 1950s. Set in the fictional town of ‘Knockglen’, the movie crew and cast took over the streets and shops of the village and captured the very essence and beauty of the Inistioge countryside and its people.

There is no doubt Kilkenny has a strong reputation for creativity and brilliant locations for movies.

‘Take two’…. next, we travel to Inistioge again to our next location for the movie Widow’s Peak. Set in 1920’s Ireland, “Widows Peak” tells the tale of a community of widows and single women that are permitted to live on an isolated hill. Starring big Hollywood names like Mia Farrow and Adrian Dunbar, the movie introduced Inistioge’s lush countryside and hills to a global community of movie-goers.

The Jim Sheridan Directed ‘The Secret Scripture’ follows a 100-year-old Irish woman recounting her time spent in various mental institutions over the years. Big name stars like Vanessa Redgrave and Eric Bana were among the star-studded cast that made Inistioge their home during filming!

Another, but earlier success story from Kilkenny Animators Cartoon Saloon, was ‘The Secret of Kells’. This animation also earned the Kilkenny creative team an Oscar Nomination. The Secret of Kells is a 2009 Irish-French-Belgian film fantasy about the making of the Book of Kells from the 9th Century.